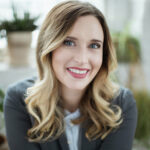 Dr. Monica Rasmussen graduated from Palmer College of Chiropractic in February 2014. Along with having her bachelors of science and doctorate, she is also specialized and certified in Applied Kinesiology.  She did her internship and worked for a short period of time in Holland, MI, until she received the great opportunity to begin a career in East Grand Rapids.

Dr. Rasmussen decided to make chiropractic her career after she, herself, experienced the benefits and healing power of adjustments. During her senior year of high school, she was a victim of chronic migraines that would would last for days at a time. Along with the hate for bright lights and loud noises, they also made her sick to her stomach. Many trips to multiple MDs were made- the only outcome ever being a new prescription and diagnosis. “Tension headaches” was one of the lesser thought out diagnoses, of which a muscle relaxant was prescribed. This particular doctor prescribed enough of this relaxant to put out a large man, yet it didn’t even touch the throbbing migraines. Tired of the lack of results and unable to handle the pain that these intense headaches had been causing for months, she decided to go the chiropractic route. After ONE visit the migraines disappeared. ONE! Without any use of prescription or over the counter drugs.

The doctor that she visited is specialized in a technique called Applied Kinesiology that focuses on whole body healing. As soon as he began the examination, he asked if she had ever been in a serious accident because so many of the tests and evaluations were pointing in that direction. The only thing that Dr. Rasmussen could think of was getting kicked in the forehead with a soccer cleat the previous spring. Turns out that that spike in the forehead that allowed for 7 stitches shifted her cranial bones enough to decrease blood flow to one side of the brain. This was the cause of the throbbing nature of the relentless migraine. Performing cranial work and allowing for the skull bones to be realigned restored the normal function of the blood vessels to the brain. This is the day that changed her life- not only because it allowed for her to be pain free, but also because she fell in love with what would inevitably be her life- chiropractic.

Dr. Rasmussen has always known that she was going to be in a career that helps people. Her caring nature and healthy conscience help her to care for each and every patient to the greatest of her ability. She is extremely excited to be a part of the East GR community and cannot wait to begin changing peoples lives as much as what hers had been changed with the help of chiropractic care.